How to Lubricate Ney?

Since it is not possible for a moist substance to absorb oil into its pores; the ney should not be blown/played in the day of lubrication, therefore it’s inside should be dry. Başpâre must be removed (it should not be forced) before lubrication. If Baspare is made of a substance that needs to be oiled, it should be oiled separately.Although Ney can be lubricated in various ways, the oil should be drained for at least 4-5 hours after process, and the outside should be cleaned with a dry and lint-free cloth. Read More »How to Lubricate Ney?

About Ney Manufacture with Order

Listen, how ney does tell the story, how it complains about breakups. Everybody, men and women, cried and groaned from my cry since they cut me off the cane. I want a heart torn apart from separation so that I can open up my problems. The person who is far from the original looks for the time to reunite again. I cried and groaned in every community. I have become spouses with bad people and good people. Everyone became my friend in their own way, but nobody researched my secrets. My secret is not far from my cry, but there is no light in every eye and ear. Skin is not hidden from life, and life is not hidden from the skin, but no one is allowed to see life. This is the sound of ney is the fire of love sorrow, not air... Whoever does not have this fire, may he also perish! .. It is the fire of love that has fallen into the ney, it is the enthusiasm of love that has fallen into the wine. Ney is the friend of the person who leaves the friend. İts notes tear our curtains. Who saw both a poison, an antidote, a neighbor, and a supporter like ney? Ney talks about the road full of blood, and Mecnun tells the stories of his love. The intimacy of this mind is nothing but foolish. The days of our grief have become untimely; days became comrades with burns. If the days have passed, let it pass; we have no fear. O unique in cleaning, stay immediately! Everything but fish fell into the water, and the days got longer for those who had no livelihood. The immature person does not understand the state of the mature person, so the word should be cut short. Son! Disconnect your connection with the world, be free. Until when will you be a silver, gold prisoner? What if you pour the sea into a bowl… Read More »Ney in Mesnevi

The ney may be held to either the right or left; there is no rule on this. The lips must not enter the mouthpiece too far, nor must they be too far outside it. Three fourths of the air is blown into the ney, and one fourth is blown outside (this proportion is illustrated below). The air escaping outside is called "forsutu" The less the forsutu, the finer the tone produced on the ney. While blowing the ney, avoid letting the cheeks puff out, which leads to air being stored in the mouth. For the first one or two weeks, work until you can produce a quality sound from the ney every time you put it to your lips, without being concerned with sitting posture or trying to place the fingers over the holes. Otherwise it will be difficult to achieve a good result when moving on to sitting posture and hand position, because you may produce a sound in one exercise but lose it in the next. For this reason, you should practice holding long tones for at least two hours every day. If after a week or two, you can produce a sound every time you pick up the ney, it is time to move on to hand position and playing posture. Left Hand Position and Sitting Posture. The holes are covered by the middle joints of the fingers. However the ring finger may cover the hole with the first joint. The little fingers should remain free. The ney is supported from below by the thumb of the right hand; the thumb of the left hand must cover the thumb hole. With this hand position, lean forward until the right hand, ney and knee meet, and rest the right hand on the right knee. If you are holding the ney with the right hand above, then the position will be reversed, with the left hand resting on the left knee... Read More »Making Sound from Ney and Sitting Position 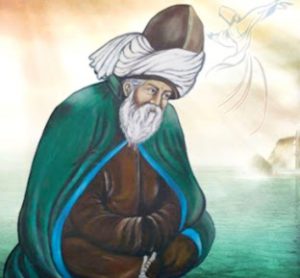 Ney's Complaint about the Separation

Listen carefully to what that Ney is saying, it complains about the separation. Ney says in his own language of state: they cut me, gather me from the reeds, listens and cries both men and women. Since they cut me off the cane, both the emotional man and the woman moan and cry from my cry. However, every person who listens to me cannot understand what I am saying, cannot hear my cry. In order to understand and hear me, I want a person who has suffered from separation, hurt heart, and I want to tell him about my pains and troubles. As a matter of fact, the person who has been separated from his homeland and who has moved away from there searches for the happy times he has spent there, wants to live that time again, wishes to reunite with his lover. I moaned, cried, stood in every assembly, in every community. I got up with bad people as well as good people ... Ney, in Sufism, is the symbol of the perfect man who is freed from his desires and is filled with divine love. Ney moans because it fell apart from the reed holder. Man has been exiled to the world from the spirit world of pre-eternity. He suffers because he is separated from God. As long as he lives in the world, as he struggles with pains, diseases and miseries, man will long for his happiness in the spirit world, and will seek salvation from the world he is alien to and living like exile. Selections from Mesnevi is such a flame that when it shines, it burns everything other than the lover. RUMI (quotation) Source: Demet Yıldırım

Research shows that even in the most primitive societies, music and religion are intertwined. The existence of man and the whole universe is started with the instruction "Kün (Be)!", with a voice. Later, the question of "Elestü bi’rabbikum" (Am I not your Lord?) is that the Almighty Creator accepts human as the interlocutor. On the other hand, the end of everything created will be from the sound of an instrument, so to speak; It will come true when Israfil blows to Sur. Man, who is the most precious being in this universe between two voices, has always had an interest in the beautiful voice, perhaps because of the divine breath [When I complete his (Adam's) shape and blew my soul into him, immediately prostrate for him. Hicr29.] within. For these reasons, religion cannot be deprived of the beautiful sound. The enormous development of our mosque and lodge music is also proof of this. A lot of research on the effect of sound on spirit and matter shows us the invisible but great effects of sound. Of course, I will not talk about these scientific studies in detail, since this article is more like an essay written for me than a scientific article. As the music community knows, the dervish lodges are like music nests in the public eye, and especially the Mevlevi tekkes served as conservatories, and this situation has continued for centuries. Undoubtedly, Mevlana Celâleddin-i Rûmi 's value and meaning to music, ney and rebab among Turkish musical instruments, and the meaning he attributes, are quite effective in this case. The mention of ney in the first line of the first twelve couplets of Mesnevî-i Şerif... Read More »Ney in Mevlevi